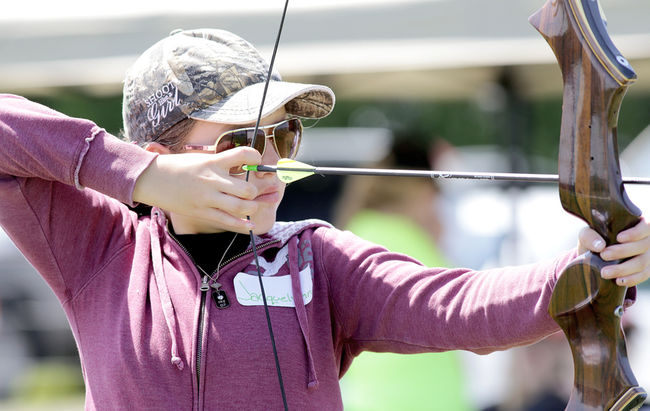 Jacquelynn Lalonde, 12, of Kingsville, pulls back the bow string during the archery workshop at the second annual Women’s Outdoor Workshop at the Rondeau Rod and Gun Club in Blenheim June 21, 2014. The workshop focuses on helping women feel confident in the outdoors whether it’s shooting guns, wilderness first-aid, fishing tactics or compass orienteering. (DIANA MARTIN, The Chatham Daily News)

Jacquelynn Lalonde draws back the arrow in her bow until the fletching sets even with the determined line of her jaw.

She releases it with a soft sharp whoosh of air against feather before it pierces the styrofoam neck of a deer.

Unflinching, the 12-year-old Kingsville girl sets her bow for another shot.

“She started the bow at the buck and bull two years ago,” said her mother, Judy Lalonde. “I think she fell in love with it.”

The Lalondes turned the second annual Women’s Outdoor Workshop at the Rondeau Rod and Gun Club Saturday into a mother-daughter opportunity to learn about a number of skills, including shooting guns and bows, gun cleaning, compass orienteering and taxidermy.

“It’s an outdoor experience,” said Dawn VanDyk, organizer. “It’s getting them into the outdoors, whether it’s hunting, target shooting, anything that has to do with the outdoors.”

VanDyk said when she got into the sport of shooting nine years ago there were not a lot of opportunities for women to learn more about guns and shooting.

“I fell across another women’s outdoor workshop and I realized I had the connections and I could do it,’ she said.

Most of the 62 women at this year’s workshop are experiencing shooting for the first time.

“A lot of women have a big fear about what guns represent and even what the wilderness represents,” said volunteer Laura Butler. “It (the workshop) teaches them not just to pay attention but not be afraid and how not to be lost.”

Judy and Jacquelynn Lalonde are well versed in shooting, their family hunts regularly but the workshop offered a unique mother-daughter weekend away.

Candice Bourque is the polar opposite of the Lalondes.

Originally from Toronto, Bourque was convinced by her coworker in London to attend the workshop. She’d never envisioned herself every holding a gun.

“I was terrified,” said Bourque. “I was just afraid to hold it and shoot it, it’s intimidating.”

Her first workshop was with handguns.

Bourque said her hand was shaking when she took the gun from the instructor. Then she shot it.

“I wasn’t scared anymore once I shot. I felt more confident,” she said.

Her fear had turned to something equally powerful.

“I’m in love. A handgun addict – that’s what I’m going to be,” Bourque added the course gave her an overall confidence she lacked when she arrived that morning.

She intends on returning next year and bringing as many girlfriends as possible.