On Saturday December 6 we held a Christmas Party, Shoot and Dinner. All proceeds of the day were to be used for the “Replace the Roof” Campaign. Following an afternoon of trap shooting, shotgun games, indoor rifle and pistol shooting/games we held a “cook yer own” steak fry. About 60 or so shooters came and went, around 50 people stayed for the dinner, all the leftovers were saved and the Wednesday following we had a “Leftovers Steak Night” which accounted for an additional $140 in sales. Absolutely no food was thrown out and we managed to raise just under (by $40) a thousand dollars for the new roof.

Special thanks to all our unsung volunteers, especially the kitchen staff Sarah and Kenneth Jackson, our Trap staff Harley Shannon and our Handgun staff Joe Isley, Greg Osborne and John McKinlay. 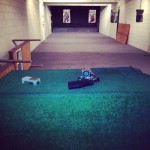