way to get a new shooter into competition and hone the skills of sight alignment and trigger control. For those without a lot of time or money to spend on the firing line, the PPC course of fire is something that can be practiced to perfection through dry firing with dummy ammunition at home.
For anyone looking for a shooting game that offers some variety in shooting positions and requires total focus and mental discipline, PPC is hard to beat.

1. Open Class – a revolver (usually a six-shot revolver of .32 calibre or above) with up to 6-inch barrels and adjustable sights. Most PPC shooters use .38 Special Smith & Wesson K or L frame revolvers. There are many modifications that can be done, but a stock gun will be fine to get started. Trigger jobs, custom grips, heavy barrels and sight ribs are among the most popular modifications. Optical sights, ports or compensators, and barrels over 6 inches in length are specifically disallowed.
2. Service (or Duty) Class – a service revolver with up to 4-inch barrels and nonadjustable sights or a service semi-auto with up to 5-inch barrels. Modified service course of fire is used – Total 600 points.

Minimum equipment required:
• A holster and sturdy belt (must be “strong-side”, no cross draw or shoulder rigs).
• 3 speed loaders or 4 magazines (this is a bare minimum, the more the better).
• A loading tray (unless you have 10 speed loaders).
• A bucket or tray for your reloads and empty cartridge cases.
• Belt mounted speed loader holders for at least three loaders.
• Eye and ear protection.
• Ammunition should be light to mid-load. Magnum loads specifically disallowed.

Open Class Match: the Essex-Kent PPC League has adopted the Standard short course of fire (600 points):
• All shooting is done two handed.
• Each stage is timed.
• 60 rounds fired in 4 stages.
• The targets are B27R silhouettes.
• The start and stop signal is a whistle blast.

Service Class Match:  the Essex-Kent PPC League has adopted a modified CPCA course of fire (480 points):
• Shooting is done one or two handed, strong and weak hand.
• Each stage is timed.
• 48 rounds fired in 4 stages.
• The targets are B27R silhouettes.
• The start and stop signal is a whistle blast.

2 rounds in 3 seconds, strong hand only.

2 rounds in 3 seconds, strong hand only

All from holster, all strong hand only.

All from holster, standing position, all two handed. 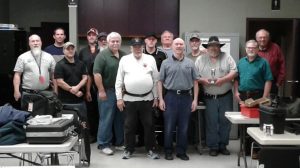 Mark. Our photographer who missed the group photo.

Clyde. Some people get rewarded just for showing up.

Bill. Come’on. Let’s get this show on the road.